Even though they are not the type of visuals that first come to mind when you talk about business intelligence, if your background is in science or engineering like myself at some point in your career you probably did 3D charts. And by that I don’t mean 3D bar or pie charts. I mean scatter plots, contours, mesh surfaces… where 3rd dimension adds meaningful information.

If you wanted to do these types of charts in Tableau, how would you do them?

I thought it would be good to put together a few examples starting from the simplest and moving to more advanced visualizations. Let’s start with the scatter plot below.

Achieving this takes a background image (the cube image to emphasize the feeling of depth) and 3 simple calculated fields that re-project x,y,z coordinates to x_rotated and y_rotated fields. Wikipedia has a great summary if you’re curious where these formulas come from. You can use z_rotated field to set the size of the marks to give perspective effect to also to set the sort order of the marks so you get the z-order right. You can find this chart as a Tableau Public visualization HERE if you’d like to take a closer look or use it as an example for your own 3D scatter plots.

The example above shows rotating in 2 directions (dashboard exposes one control but you can download and open the sheet to see both options) but what if you wanted to be able to rotate in 3 different directions? I saved this for my next example as incremental change makes it easier to follow.

Caffeine molecule example above uses a dual axis chart. One axis draws the atoms while the other draws the bonds between them.  It still relies purely on the background image, mark size and z-order to achieve the 3D look just like the previous example but  you will notice that, this time “size” has a multiplier to account for the size of the atom in addition to the distance in 3D space to represent the relative sizes of different atoms. Another thing you’ll notice is that now that you’re using dual axis, z-order doesn’t always work well since Tableau sorts within each axis independently so in this setup atoms are always drawn above bonds but each group is sorted within themselves. You can find the Tableau public viz HERE or by clicking on any of the screenshots.

You can extend this basic idea to do many other types of 3D views. For example a contour plot like the one below and go from 2D contours on the left to perspective view with 3 extremely simple calculated fields. 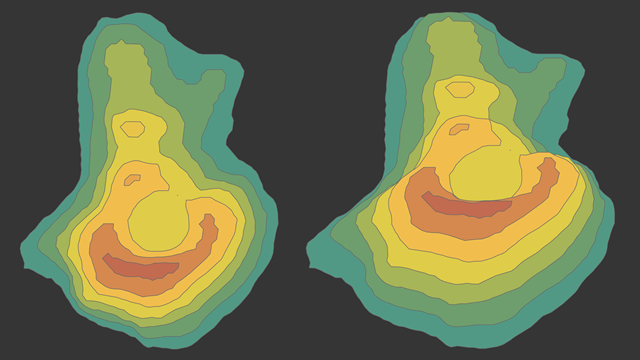 Or 3D meshes that let you play with different parameters and allow you to explore results of different equations.

To look at waves and ripples…

Or doing just some viz art like downloading radio telescope data to build the album cover of Joy Division’s Unknown Pleasures album in 3D in Tableau.

How about also drawing axis, grids and even labels and have them rotate with the visualization instead of using a static background image and just have the marks rotate?

Since you’re custom drawing these objects, you will need to have data points for axis extents, grid cell coordinates etc. I did this using Custom SQL. You can find data used in all example workbooks HERE as well as the SQL used. But easiest way to understand how it works is exploring the visualization. Thanks to VizQL, you can simply drag the [Type] pill from color shelf to row shelf see the visualization broken into its pieces which will help you understand how lines (surfaces, grids etc.) are handled differently from points and how it is possible to turn on/off grid using a parameter.

Besides Custom SQL, there is very little change to go from static background image to dynamic axis. You will see there is a minor change only in the x_rotated field’s definition.

To be honest  this post didn’t originally have one but as I was wrapping up the examples, I showed them to some co-workers. Apparently two Tableau developers (Steven Case and Jeff Booth) had put together a stereoscopic sphere example and they thought it would be a nice addition to this post and they were kind enough to share it with me.  Time to put on some anaglyph glasses…

In this post I tried to share some examples of how to create various types of useful 3D charts in Tableau. I hope you find it useful.

28 thoughts on “Going 3D with Tableau”