Nightingale’s rose is probably one of the most influential visualizations of all time as the tool Florence Nightingale used to convince Queen Victoria about improving hygiene at military hospitals hence saving lives of many thousands of soldiers.

Commonly referred to as coxcomb or polar area charts, roses resemble both pie and bar charts in some respects. The layout resembles a pie chart but each slice has the same angle in coxcombs unlike pies. While radius of the slice is related to quantity being displayed (like height of the bar in bar charts), coxcomb uses the areas of slices.

Coxcombs help make seasonal patterns visible and deemphasize small differences while providing a nicer image, all of which worked well for Nightingale’s use case given her data and the target audience for the charts.  This may or may not apply to every situation so often a bar chart is probably the safer route to go.

I was curious whether anyone had built a coxcomb chart with Tableau before but I didn’t come across any so I decided to make one myself. Following chart shows monthly sales for different departments. You can click on the image to bring up the interactive Tableau Public viz and also download to take a closer look on how it is set up. 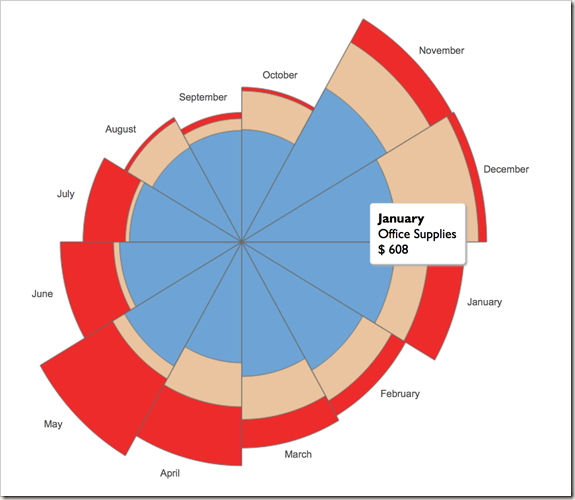 Since each of the slices represent sales for that particular month and department, you will notice that the entire slice gets highlighted when you make a selection instead of just the band visible in the chart as you’d expect.

Each slice is a polygon comprised of 102 points (seemed to give a good, smooth curve) which are not present in the data but generated by taking advantage of densification in Tableau. Enjoy!